How to use Docker containers 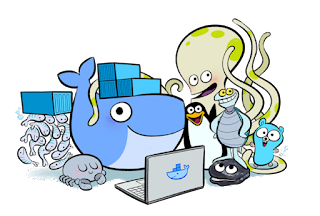 Virtualization is all about deception.

With heavy virtualization (i.e. VMware, Virtualbox, Xen) a guest operating system is deceived to think it is running in a dedicated hardware, while it is actually shared.

With light virtualization (i.e Docker) an application is deceived to think it is using a dedicated operating system kernel, while it is actually shared too. It happens that in Linux everything but the kernel is considered an application so with Docker you can make multiple linux distribution share the same kernel (the one from host system). As this is a higher abstraction level of deception than the kind of VMware it consumes less resources, that's why is called light virtualization. It's so light that many applications are distributed in docker packages (called containers) so application is bundled along and operating system and its dependencies to be run all at once in another system and don't mess with its respective dependencies.

Sure there are things light virtualization cannot do but they are not many. For standard "level-7" application development you won't find any limitation using Docker virtualization.

Docker provides package repositories for many distributions. For instance, here you can find instructions to install docker in an ubuntu distribution. Just be aware that if you are using an Ubuntu derivative, like Linux Mint, you're going to need to customize those instructions to set your version in apt sources list.

Once you have installed docker in your computer, you can run a Hello World app, bundled in a container, to check everything works:

Be aware that although you might we able to run docker containers you may not be able to download and install them without sudo. If you are not comfortable working like that you can add yourself to docker group:

You may need to log out and re log to activate change. This way you can run docker commands as an unprivileged user.

You can make your own custom containers, but that is a topic for another article. In this article we are going to use containers customized by others.

To find available containers, head to Docker Hub and type any application or Linux distribution in its search field. Output will show you many options. If you're looking for a raw linux distribution you'd better use those tagged as "Official image".

Guess you want to try an app in an Ubuntu Xenial, then select Ubuntu is search output and take a look to "Supported tags..." sections. There you can find how different versions are named to be downloaded. In our case we would take note of "xenial" or "16.04" tags.

Now that you know what to download, let's do it with docker pull:

If you want to check how many images you have locally available just run docker images:

You can start instances (aka containers) from those images using docker run:

Using --name you can assign an specific name to your container to identify it from other containers started from the same image.

Problem starting containers this way is that they close inmediately. If you check your containers status using docker ps:

I've used an -a flag to show every container, not only the active ones. That way you can see that ubuntu_container_1 ended its activity almost at once since start. That happens because docker containers are designed to run an specific application and close themselves when that application ends. We did not said which application to run in the container so it just closed.

Before trying anything else let's delete previous container, using docker rm, to start from scratch:

Now we want to keep our container alive to access its console. One way is this:

We've used -d flag to run container in the background and -ti to start and interactive shell and keep it open. Doing so we can see that this time container stays up. But we are not yet in container console, to access it we must do docker attach to connect with that container shell:

Now you can see that shell has changed its left identifier. You can leave container console using exit, but that stops container. To leave container keeping it active use Ctrl+p followed by Ctrl+q instead.

You can pause an idle container to save resources and resume it later using docker stop and docker start:

Chances are that you want export changes made to an existing container so you can start new container with those changes already applied.

Best way is using dockerfiles, but I'll leave that for a further article. A quick and dirty way is to commit your changes to a new image with docker commit:

In this example we created a new image called custom_ubuntu. Using that new image we can create new instances with the changes made so far to ubuntu_container_1.

We aware that commiting changes from a running container stops it to avoid data corruption. After commiting is ended container is resumed.

So far you have a lightweight virtual machine and you have access to its console, but that is not enough as you'll want offer services from that container.

Guess you have configured a SSH server in your container and you want to access it from your LAN. In that case you need container ports to be mapped by its host and offered to LAN.

An important gotcha here is that port mapping should be configured when a container is first time started with docker run using -p flag:

Now you can access to the container SSH service through host 8888 port.

Our containers won't be isolated islands. They may need files from us or the may retrieve files to us.

One way to do that file sharing is starting containers mounting a host folder as a shared folder:

Here, host folder docker_share will be accessible from container at /root/shared container path. Be aware you should enter absolute paths. I use $(pwd) as a shortcut to enter host current working folder.

Once your container is started, every file placed at its /root/shared folder will be visible from host, even after container is stopped. The other way round, that is placing a file from host to be seen at container, is possible but you will need to do sudo:

Another way of sharing is using built-in copy command:

Other way round is also possible, just change argument order:

So far you know how to deal with docker containers. Next step is creating your own custom images using dockerfiles and sharing them through Docker Hub. I'm going to explain those topics in a further article.