It is not fresh news, but last month Google announced they are going to turn down Google Code after 9 years of existence.

That service started in 2006 with the goal of providing a scalable and reliable way of hosting open source projects. Since that time, millions of people have contributed to open source projects hosted on that site. Nevertheless time have passed and other hosting options, like GitHub or Bitbucket, have gained greater popularity than Google Code.

No one can deny that Google likes to try new trends and technologies but the fact is that they have to keep happy their stakeholders so they end every service that doesn't stay high in popularity. Many high quality service have been shutdown by Google before Code's one: Notes or Wave are the first that come to my mind. Problem is that Google shutdowns services because they are not popular but some argue that they are not so popular because people and companies are afraid of Google changing its mind and closing service as time passes, so they don't use them. Who knows...

The facts are that since March no new project can be added to Google Code and that already existing project will keep their functionality only until August of this year. From there on, project data will be read only, an next year the site will be definitively shutdown although project data will be available for download in an archive format.

Those like me who have projects in Google Code have a Google Code Exporter to migrate project to GitHub and documentation to migrate to other services manually.

Many of my projects are rather outdated but I guess I'll import them to my private Bitbucket repositories to refactor them heavily and afterwards make them publicly available though GitHub. 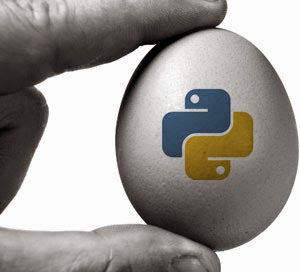 Once you have finished your program you probably will want to share it. There are few ways to share a Python program:

PyPI is the official python package repository and it's maintained by Python Software Foundation. So it's the central repository of reference for nearly all python packages publicly available. PyPi has a webpage from where you can download any package manually but usually you'd better use pip or easy_install to install packages from your console prompt. I usually prefer pip, because it's included by default in later Python 3.x versions and besides it's the tool recommended by Python Packaging Authority (PyPA), the main source about best practices about python packaging. Using pip you can download and install any python package from PyPI repositories, along any needed dependency.

You can upload two main types of python packages to PyPI:
Wheel packages are the recommended format for main users but source distribution are useful to build native packages for popular linux distros (deb packages for Debian/Ubuntu, rpm packages for Red Hat/Fedora/Suse, etc.). We are going to see both of them in this article.

First thing you should get to make sure your application is ready to be packaged is to structure it in an standard folder tree structure. You can order your files inside your project in the way you want but if you review some of the more popular python projects in Bitbucket or GitHub you'll that they follow a similar way to place their files across their folder structure. That way is a best practice that Python people has been adopting as time passed. To see and example of that structure you can check a sample project structure developed by PyPA, Following that best practice you are supposed to put your installation script and all files describing your project at the project root folder. Your application files (the ones you actually develop) should be inside a folder called as the project. Other files related to your development, but not the developed application itself, should be in their own folders at the same level than your application folder but not inside it.

Let's see another example: check Geolocate GitHub repository. There you can see that I put compiling, packaging and installation scripts at root level, along with files like README.rst or REQUIREMENTS.txt that describe the application. Development files are inside application folder (geolocate folder) instead. Some people prefer to place their unittest files in their own folder outside application folder and other prefer to put them inside it. If tests are not intended to be distributed to final users I think it's better to keep them off application folder. In case of Geolocate they are inside to solve some problems with imports, but now I know the causes so I guess in my next project I will keep my tests appart in their own folder.

Once you have structured your project in an standard folder tree, it is a good idea to create a virtualenv to run your application. If you don't know what a virtualenv is, take a look of this tutorial. That virtualenv would let you define the list of python packages your application needs as dependencies and export that list to a REQUIREMENTS.txt file, as is explained here. That file will be really useful when you write your setup.py script, as I'm going to explain.

Setup.py script is the most important file to create PyPI compatible packages. It serves two primary functions:
You can get a listing of commands available through setup.py running:
Setup.py depends on setuptools python package, so you have to be sure to have it installed.

In this article I'm going to explain you how to write a functional setup.py script using as a guideline the setup.py file at geolocate. As you can see in that example, file is essentially simple: just import setup function from setuptools package and call it. The real customization comes with parameters we pass to setup(). Let's see those parameters:
Some people use "data_files" keyword to include files that are not placed inside any of their application python packages. Problem I found with this approach is that those files end installed in platform dependent paths so it's really hard for your scripts to find them when they are run after installation. That's why I prefer to put my files inside my packages and use "package_data" keyword instead.

Once you have written your setup.py file you can compile your packages, but you might want to check the sanity of your setup.py before. Pyroma analyzes if your setup.py complies with recognized good packaging practices, alerting you if doesn't.

If you are happy with your setup.py configuration you can create a source package just doing:

While to create a wheel package you are only supposed to do:

When you use setup.py to create your packages, it will create a dist folder (in the same folder as setup.py) and place packages there.

Problem arises when you try to use find_packages function, for your packages keyword, along with exclude argument. I've found that in that particular case, exclude argument doesn't work and your undesired files get included into the package. It happens this behavior is a bug, and while they fix it the workaround involves first creating source package and afterwards creating wheel package from source one with this command:


Your packages can be locally installed with pip:

Trying to install locally your package in a freshly created virtualenv is a good way to check installation really works as expected.

To share your package you can send it through email or make it available in a web server, but the pythonic preferred way is make it publicly available through PyPI.


To use any of the two interfaces you have to register. Be aware that user database is not shared between two sites so you'll have to register twice. In register page you only have to fill the submission form with your project details. Don't be stressed you can modify any of the fields afterwards.

After registering you can submit your packages files through PyPI web interface but you might want a higher level of automation. To be able to submit files from console (or from any script), you'll need to create a .pypirc in your home folder (notice the dot before the file name), with this content:


Afterwards you can run twine command to upload your packages to PyPI:


You may need to install twine with pip before using it if your system has not installed yet. Twine will use your credentials stored in ~/.pypirc to connect to PyPI and upload your packages. Twine uses SSL to cipher its connections so it's a safer alternative to other options like using: "python setup.py upload".

After that your packages will be available through PyPI and anyone will be able to install it just doing: